Jason Burgess reminisces about his 2018 Spring Turkey Season and credits SRB Field Rests for his success.

Opening morning of the 2018 Spring turkey hunting season, I was taking a break after my morning hunt. I heard a thundering gobble of a mature Tom that had been seen the evening before on a power line near camp.

Thinking fast, I shifted into “full blown turkey hunting mode” as I reach for my gun with the SRB Gun Butt Sling/Tote Strap already attached from my prior hunt, and my SRB Turkey Rest. I quickly cut the distance between camp and the bird on the power line as took off down the trail.

I could still hear the thundering gobbles coming from the power line, even over the sound of my heartbeat that had crept up my neck and sounded like a bass drum. As I set up I realized that the Tom was getting closer, yet thinking it probably would not leave the clear cut. I quickly found a good place to take a seat. I waited, and waited, and waited for what seemed like eternity. Luckily, having the SRB Gun Butt Sling and SRG Field Rest, I was able to sit wait that bird out while still having my hands free for a few calls to entice him.

After about 30-40 minutes the Tom committed to coming in and giving me a good shot so I could slap the gobbler gauge on him and bring him home!

I had a great 2018 season: I can’t say enough about the convenience of SRB Field Rests products. 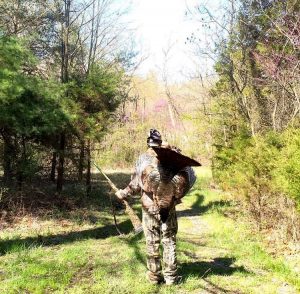