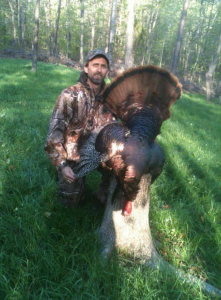 The second weekend of the Virginia spring turkey season, SRB Field Rests Pro Staff Steve Long planned to hunt over a food plot. He heard a few birds gobbling in the woods. These birds were staying in the hardwoods.

Steve decided to set up in the hardwoods and made a few calls. It wasn’t long before he heard birds gobbling and they were making their way to where he was set up. Steve knew there were at least two birds; he was surprised when he saw a third bird following close behind.

Of the three birds, the dominant bird in the lead was strutting as the other two followed behind feeding. Steve only had to make a few calls to let the birds know of his location, and it worked flawlessly. The birds worked there way right in front of Steve.

Enjoy this video of Steve’s hunt as it unfolds and hear him tell his story.