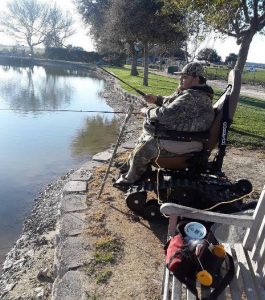 My story is about what can happen without an SRB Field Rest and why you shouldn’t hunt without one.

This past weekend, I went turkey hunting here in California. When I arrived, I realized that my SRB Field Rest had flown off of my trailer I haul my track wheelchair on. I decided I was going to have to make do without it.

Five jakes were coming to our calling and straight to our decoys. I got ready to take the shot. The jakes hung up just outside of my view, leaving me having to hold the crossbow up in a firing position for 30 minutes. I was unable to lower my crossbow because the birds could see the end of the crossbow. I didn’t want to get busted by them seeing movement. 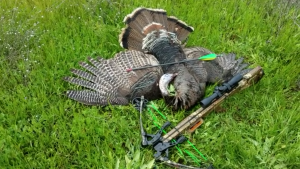 When the birds finally did come into view, they were 37-yards away. I was fatigued, so I wasn’t able to hold the crossbow as stable as I had hoped, which resulted in my shot hitting the bird high, making it look like I had only cut feathers. We watched him strut for 400 yards before disappearing along the river. We looked for him for a long time, but due to not finding any blood we thought it wasn’t a fatal hit.

My guide took his dog out the next morning to double check and found my bird. The jake was found by a fox some time through the night. The result is me not being able to harvest any meat from my bird, which is the main reason why I hunt. The picture in this article is the only one I could harvest because I was unable to recover the bird myself and enjoy the harvest of my first turkey with a crossbow before scavengers tore it up. I will never hunt without my SRB Field Rest again, and neither should anyone else.