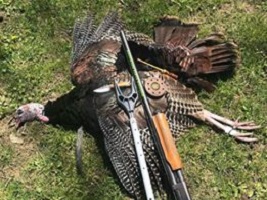 Brian Whitaker was experiencing a tough spring turkey season in Indiana. He had hopes that this would change when he invited his fiancé, Toni, on the hunt in her quest of harvesting her first ever turkey. Here is how that hunt unfolded, as told by Brian:

I was into day five of my recent Indiana turkey hunt and was beginning to become somewhat tired and frustrated. We had an extremely cold start to spring and seemed to have the birds on lock-down during our first couple weeks of the season.  Our family farm itself seemed to be desolate. All the gobbling was coming off the neighboring land and other than one, quiet, tom that walked by a family friend on opening day, we were not having any luck. Up to this point, the crazy weather, lack of nesting hens, and general senses of the wild turkey were getting the best of us.

Sharing Time in the Field
The previous days’ hunt had been a grind except for my fiancé, Toni, joining me on the fifth day. This trip was on the tail end of several three-day weekends in Kentucky learning, scouting and hunting some public land. Regardless, it was about my fiancé now. Despite my failure to bag a bird to this point. Toni would get the first crack at a turkey over the next few days. Our first day out together was much like what I was experiencing on the previous days hunting.  The toms would gobble early, fly down, hen up, and shut off. We had spotted several gobblers with hens late into the afternoon which made me think that the hens were not yet nesting. This made it difficult to try calling the toms away from the hens. 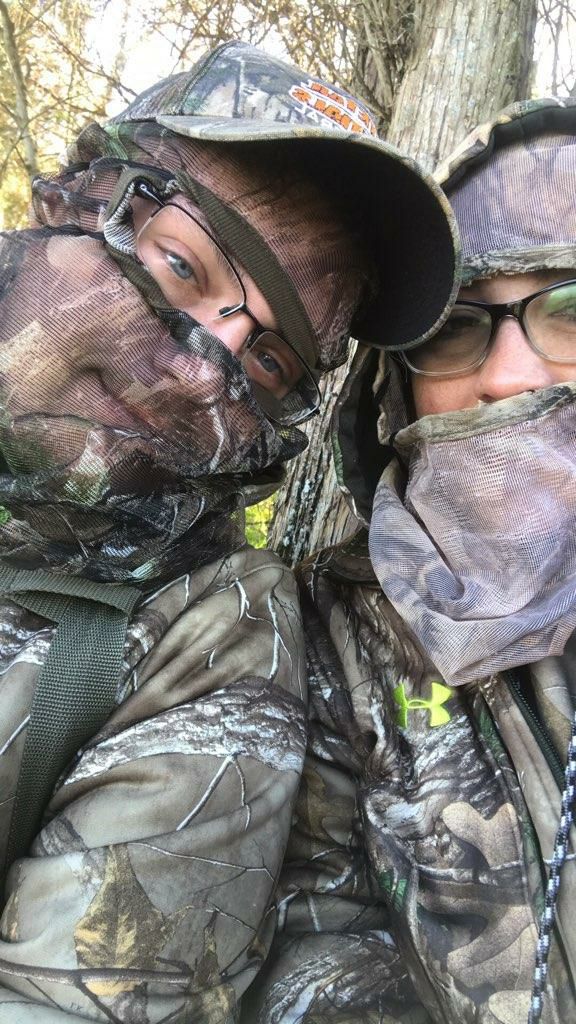 On the morning of our last hunt, I laid in bed until Toni finally awoke, kind of hoping she wouldn’t so I could sleep in a day. After about 15 minutes she got up, and I did as well. Regardless of my previous lack of encounters and sinking enthusiasm, I was anxious to get her on the hunt.  It was time to make things happen; go all in. We had decided to start out on public land. We are fortunate to have some good public property within a mile of our farm. In years past, this property had always been a producer of birds when we were not having any luck on our farm. We had a great morning full of gobbles and five birds within 200 yards. However, they did the same thing as the previous days. Flew down, henned-up, and shut up! Occasionally a bird would gobble in the distance; we would call with no response.

The Game Plan
About 11:20 that morning we decided to make a move down the road to another area that I had hunted with success in the past. On the way, we passed a parking lot of an area always full of trucks.  I have never hunted this area and just decided we should try it. The 1:00 pm public land cut off was fast approaching, so the closer, the better. Toni and I quickly jumped out, geared up, and began our trek toward the back of the property. There was a bush-hogged trail lead back to a couple of fields that are about two acres in size before dropping into a vast forest for miles. We set up at the back of one field in a corner. Toni set up with her SRB Turkey-Predator Field Rest with some cover.  I moved down where I would have decent cover to film and still communicate with her.  I made a series of yelps with my new Feather Creek Slate Call, and we sat quietly for about fifteen minutes.

I told her that we need to get up and walk out at about 12:30 so we can make it off the property for the legal cut off time. She urged me to make one more call, so I took out a mouth call and began a series of cuts and yelps. A mature tom gobbled instantly. It almost sounded like two birds gobbling at the other end of the field. I knew the bird was just around the corner and Toni needed to be up and ready. I made one more call at 12:25 and they immediately responded.  I could see a nice tom through the thicket strutting and coming around the corner heading our way.

The Play
When the tom finally made its way around the corner and started the upward swing of the field in our direction, I reminded Toni to be slow, steady, and confident. Then it happened. Another Tom popped out around the corner and began his approach uphill. I thought I had initially heard 2. It was now or never, and we were going to double on her first bird! I slowly put down the camera picked up my gun and slowly got into position. It was even more critical now to be able to communicate with Toni because this added an extra element of excitement for the first-time turkey hunter. I made sure Toni knew her bird was the lead bird; my bird was in the back as they strutted.  I called bringing them into range. Her tom, obviously being the lead tom, I think was a year older than mine. The back bird made sure to keep his distance.  Finally, both birds were at a comfortable range. With her bird still leading, for her it was a 28-yard shot with her 20-gauge, Remington 1100 and about a 37-yard shot for my 12-gauge Remington 870. Both birds stopped and stared like maybe they had picked us out.

The Countdown
I began to count: 3, 2, 1, BOOM–both birds went down! My bird flattened and Toni’s bird dropping over the hill into the undergrowth. I took a second to think and told Toni to get her gun and come on. We approached our birds, mine still laying there flat, and not a peep from hers out of the bush it had dove in. As I walked over to my bird, the bird she shot at flew up out of the bush. She raised her shotgun, took aim, but she didn’t pull the trigger. Later, when I asked why she didn’t take the shot when the bird took flight, she replied, “Because you guys always told me not to shoot a turkey in the body. The shot won’t penetrate through the feathers. If I couldn’t hit him in the head on the ground how the heck could I hit him in the head flying.”  She was not wrong.  However, I explained to her how sometimes it is necessary if a bird is possibly mortally wounded to do what it takes to finish it off. 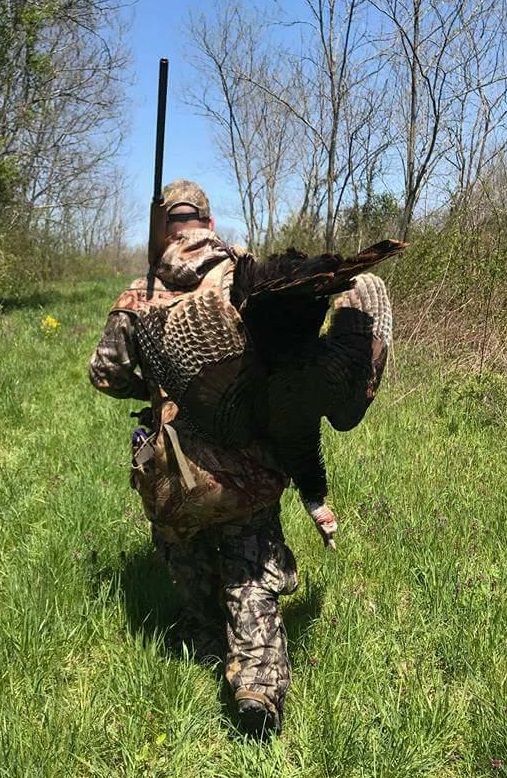 The Field Review
Fortunately, we didn’t find any blood but merely a few feathers that could have been from my bird. After her frustration wore away, I asked her to talk about it the shot with me to see what might have happened. From our discussion, we both felt she was very composed, so she had no idea why she missed. After reflecting a while on the hunt, I asked, “Did you remember to aim?” I asked if, “Did you aim between the white head and the red waddles?” It hit her like a light switch went off! She replied, “No, Brian, in the excitement I believe I just aimed top of the head.” I believe she skimmed that bird, scared, maybe even stunned him. He will live to gobble another day and we will continue to share, learn, and enjoy our experiences together as long as possible.

Toni is still frustrated. We had some close calls today on the final day of our Indiana Turkey season. Overall, she learned a great deal. She is hooked on our sport and is looking forward to getting back out there next year. I will tell you, not a ton of girls have this kind of determination to get dirty, fight ticks, and shoot turkeys. This girl has got that Turkey Fever! It’s great to share your passion with the one you love, as well as, others who share the same passions.

This passion has led us to develop the platform we have at Hoosier State Outdoors on Facebook. It is about educating, advocating, and getting others involved in the great outdoors. State to State, Country to Country, we are “Hoosiers helping Hoosiers,” and anyone else who supports our cause. A big thank you to SRB Field Rests for your support and following our page. And, thank you to Richard Howland, owner of SRB Field Rests for the opportunity to share and enjoy your products.