This was a tough season for turkey hunting with bird numbers being down and the crazy weather the Midwest has experienced this year. We were on day ten of our Midwest two state turkey hunt, and we had hunted hard. Every day brought another bout of defeat, and I was beginning to feel those pains. We were down to the very last morning of our Kansas hunt, and I would be lying if I didn’t admit to feeling like turning the alarm off and going right back to sleep.

Last-Ditch Effort
On this morning, we were going to hunt birds that were roosted on an adjacent property that we did not have access to, and the chances of the birds flying down on our side of the fence were 50-50. With luck we had been experiencing, it felt more like the chances would be 10-90. It was our last-ditch effort, and it was close to our lodging, if the birds didn’t cooperate, we could be back early and start packing up for the 21-hour drive home. 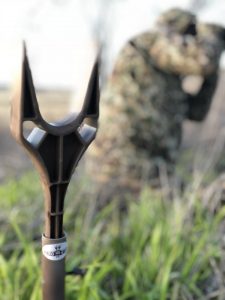 We drove the short distance to the area we were hunting, and on the drive is when I decided I was going to trek in light this morning. I got out of the truck as I grabbed my Alps Outdoorz Vanish turkey lounger, my shotgun, and my SRB Turkey-Predator rest. I checked to make sure I had a shell in the chamber, and we started our trek down the fence line to the cross fence where we planned to sit. We had to be extremely cautious about the fact that the trees had not grown their new leaves so the birds could see us.

We set up about 50 yards down the fence line where I had almost sat down on a skunk earlier in the week when I tried a stalk on these birds. I will admit that I was a little nervous about the area knowing there was a skunk den so close, but I can’t say that is what made me so uncomfortable that morning. I sat for a few minutes, and I couldn’t get comfortable. I had to readjust my chair, and it was while I was doing that when the Tom let out his first gobble. The birds were roosted pretty close, and now I felt paralyzed to move. Richard growled at me to get settled and to quit moving around, so I quickly sat down in the chair and staked my SRB rest into the ground in front of me. 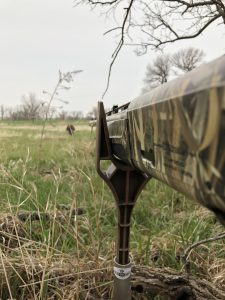 Waiting it Out
About 20-25 minutes and a dozen gobbles later; we could tell the Tom was on the ground. It wasn’t too much longer when I heard Richard say, “Hen, 8 o’clock! Two of them.” I couldn’t see them because of a huge cottonwood tree about 5 feet from me, but I did have a perfect view of the fence line. I now knew where I needed to have my gun barrel pointed, so I quickly reached down my shotgun cupping the head of my SRB rest and smoothly lifted it out of the ground. I turned my body a little and easily stuck the rest back into the ground where I needed it—never removing my shotgun from it. We waited in silence for what seemed like an eternity.

Finally, I saw hens and then the Tom. The hens made their way out into the corn stubble about thirty rows in, but the tom stopped about twelve rows in and watched the hens, strutting and gobbling. He was about 80 yards from me and knowing the hens were working down the field and if the hens kept his interest, he was bound to walk right into range. I watched patiently as he would strut and take a few steps, over and over again. Two steps to the left, two steps to the right—he did not seem to be getting any closer. I felt I had stared at this bird down the barrel of my Beretta Xtreme shotgun so long that my vision was getting blurry. My trigger finger hand was asleep and numb, and my forearm of my other arm was burning, then it dawned on me that I was tense on my shotgun and didn’t have to be, it was solid on my SRB rest. So I loosened my grip, and luckily I could feel the blood returning to my arms.

It’s Now or Never
Another fifteen minutes passed, and the Tom was finally within shooting range, it was at this point that I was thankful for a good solid field rest because I know at that crucial moment I would not have been able to pull off the shot that I took for arm fatigue. The Tom was looking so hard for hens that he must have seen my head and shoulder movement, as I gripped my shotgun, and he got nervous. The tom let out a half-hearted putt, as he came out of strut. He paused with his head straight up and putted again, as everything inside of me was screaming, “Now! Now! Now! This is your only chance! He is about to be out of here!”

The tom didn’t move as I quickly and smoothly picked up my shotgun a few inches out of the rest to get my Tru-Glo Magnum Gobble Dot Xtreme bead on its head, I steadied and squeezed the trigger. BOOM! I saw an outstretched wing go up in the air then I didn’t see or hear anything else. I felt pretty solid and confident about the shot, but with the corn stubble about 10-12 inches high, I wouldn’t have known if the bird took off ducking and diving down the cornrow or if it were laying between the rows. Richard quickly asked, “Did you get him?” because he could not see the bird from where he was sitting. I replied, “Yes!” I was still watching intently as I put my gun back on safety and arose from my seat. Richard jumped up and sprinted out to where I shot at the bird. The bird was down and only made a few flops as Richard approached it. Richard turned around and looked at me and pumped his fist in the air assuring me. I let out a huge sigh of relief…not only was this a hard season, I was really starting to despise the “Monkey on my Back!” Redemption is so sweet in success.

Sweet Resolutions
FINALLY! My season was complete! I was blessed with a beautiful Kansas Rio, and I had several folks to be thankful for. If it were not for my husband, Richard, hanging in there with me—through the good, the bad, and the ugly–and good friends, that may not be blood kin but still feel like family, who are gracious enough to share their resources with us, and the farmers that are kind enough to share their land, we would not have these memories to share. 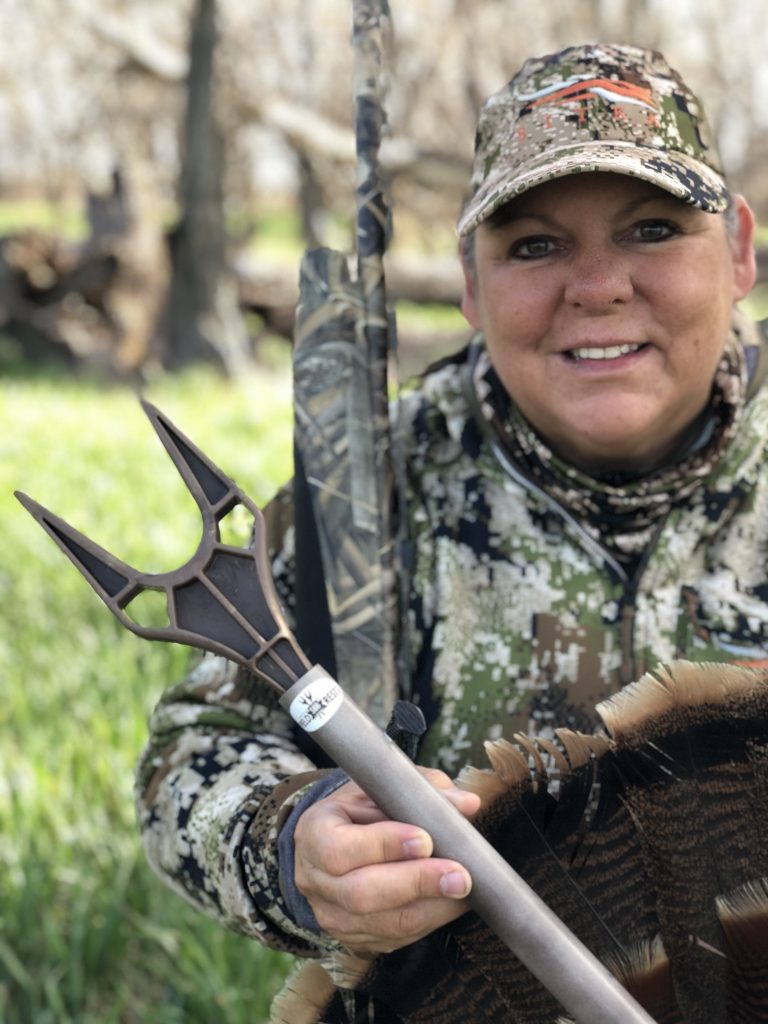 I can say, without a doubt, that SRB Field Rests made this hunt a success. Without it, I would not have been able to make a clean ethical shot on this bird due to arm fatigue from having to hold my gun for the extended time it took for this bird to walk in range. Any movement up until the point that I took the shot would have alerted that bird and I would have rushed the shot possibly making a clean miss; or worse yet, just wounding the bird. The fact that SRB Field Rests are so easy to place into the ground gave me the chance to quickly move my gun at the last possible minute before this bird was in sight distance. Once in the ground, the rest is sturdy enough to hold the entire weight of my gun without leaning. I was able to keep the butt of my gun shouldered and completely relax my arms. The new wing bolt set screw makes the rest easier than ever to adjust quickly. The rest is lightweight and easy to stow in the back pouch of my vest or to carry by hand. I won’t go on a turkey hunt without my SRB Turkey-Predator rest.