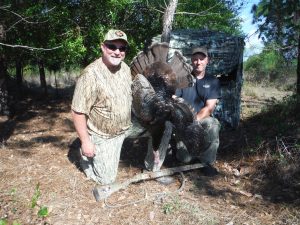 On March 30, 2017, I was able to fulfill a bucket list dream; to complete my Turkey Grand Slam! As a bonus, I got to share in my buddy fulfilling his bucket list dream of tagging an alligator. It all started in March of 2016, when our friends, Jarrett, Gwen, Sparky of M2D Camo Properties, along with my wife Shelly started planning a fun two-week trip to Florida.

Finally, March 19, 2017, arrived and we embarked from Wichita, Kansas on our adventure south that included a stop at Bass Pro Shops at the Pyramid and Beale Street in Memphis, Tennessee on the first night. Then we moved on to Florida to sightsee, attend a St. Louis Cardinal spring training game and eat a whole bunch of good food we don’t have in Kansas. We also went on a planned fishing trip which was supposed to be a big water trip, but eight-foot seas kept us in the inlets instead. We visited a lighthouse, my first, which was very cool.

The Hunt is On 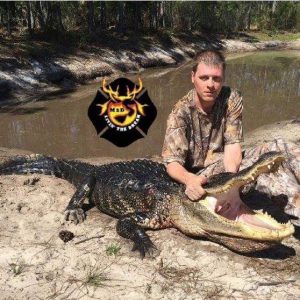 On March 29th, it was time to hunt. We hooked up with Matt of Triple M Outfitters Unlimited through Sparky. On the first day, we had a lot of birds working just out of gun range; it was a very eventful day. Finally, that afternoon, Sparky was able to coax one into gun range. We spent day two working a couple of different locations from blinds. I remember it being quite warm in the blinds that day. We did not get any birds on day two, but a boy from Kansas turkey hunting in Florida and having an alligator pop up in the pond we were sitting by made it memorable. The highlight of day two was that Jarrett was able to bag a 10.5-foot gator. There was a bunch of excitement and stories that evening.

On day three, our final day in Florida, Sparky and I met Matt to see if we could pull off this harvest to complete my Turkey Grand Slam. We went to a new location and quickly set up. We climbed into the blind and waited. It wasn’t very long before we could hear a bird spitting and drumming not far to our right. As luck would have it, the vegetation was so thick we could not see it. We called, the bird would gobble, spit, and drum. This scenario went on for a couple of hours. It was obvious he was with a hen. We made the call to take a break for lunch and change locations. Sparky had to leave so it was Matt and I headed off to lunch. While traveling to lunch and while we hunted, Matt was feverously working on another backup plan. He secured access to another property for us to try.

After arriving at the new property, we set up the blind and planned to spend the rest of the day there. Matt offered that, just in case we don’t get this done on this afternoon, could I come back in the morning till about 9:00 a.m. and hunt. Matt did not want me to leave Florida without fulfilling my Turkey Grand Slam dream. We sat in the blind from about 2:00 p.m. until 5:00 pm, with temperatures in the upper 80’s, not hearing a sound except an occasional call from one of us. 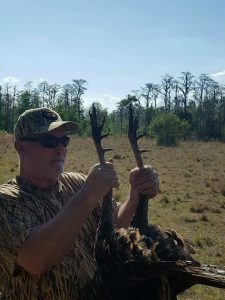 Suddenly, Matt said, “Tom to the right!” Sure enough there he was. I waited for him to close the distance to about 20 yards. I let the Browning, Citori send the #5 shot his direction. Matt yelled, “There it is, Buddy! You got your Grand Slam.” I was elated! I ran out to get him and what a dandy bird he was. The tom weighed 21 pounds, had a 9 3/4″ beard, and 1 3/4″ spurs. Matt and Triple M Outfitters Unlimited busted their butts to make sure we had a successful hunt.

Thanks to Sparky of M2D Camo Properties for hooking us up with Matt. I also can not give thanks enough to Gwen, Jarrett, and especially Shelly for making this dream possible. A great memory as the 2018 season is getting ready to start. “GOBBLE-GOBBLE, and good luck to you this season.”